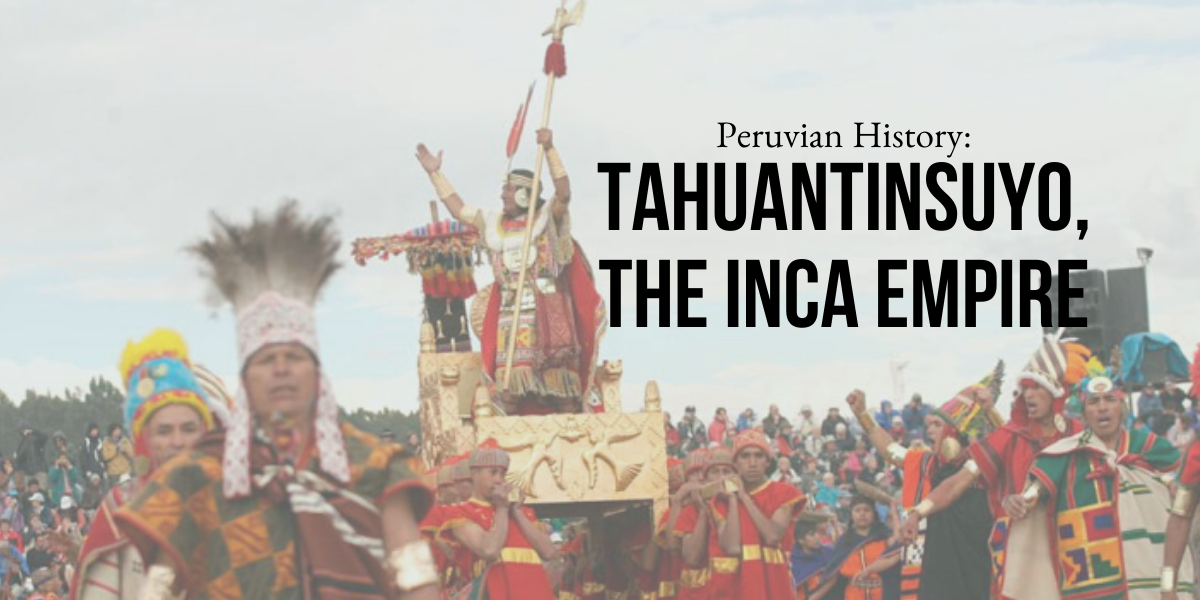 As a responsible volunteer looking for opportunities in Peru, it is important to know some of the country’s history. So, when you look up information about Peruvian history on the internet, a lot of time you see the word Tahuantinsuyo or Tawantinsuyo, a term you might have never heard. What exactly is Tahuantinsuyo? How did it start? How big was it?

The first thing you need to know is that when saying Tahuantinsuyo, we are talking about the Inca Empire. If you want to know more about this vast empire, keep reading!

There are many myths about the origin of the Tahuantinsuyo, but here we will tell you the one based on the Inca mythology.

According to the Inca mythology, the Tahuantinsuyo started with two people—Manco Cápac and Mama Ocllo. This couple, both husband and wife as well as siblings, were sent by the Sun God to look for an adequate place to establish a city and civilise the people that lived there.

In order to accomplish this mission, the Sun God gave the couple a gold stick. They had to pound this stick on the ground of every place they went to until they found soil where the stick would sink in easily. Guess where they found that soil? Yes, you’re right, in Cusco!

So they chose Cusco to establish this new city that would become the capital of the Inca Empire, and for this civilisation, the belly button of the world. However, despite of its importance in history, the Tahuantinsuyo did not last long—only 95 years between its beginning in 1438 and its end in 1533.

With 2,500,000 km², the Tahuantinsuyo was the biggest empire in the Pre-Columbian America. Its territory covered from the south of Colombia to the centre of Chile, including Ecuador, Argentina, Bolivia, and, of course, Peru.

All of this territory was conquered through war and alliances between the Incas and other cultures in the XV and XVI centuries.

Origin of the name

The Inca was the highest authority or head of state in the Tahuantinsuyo. The Inca empire had five official Incas: Pachacútec, Túpac Yupanqui, Huayna Cápac, Huáscar, and Atahualpa. The latter was in charge of the empire when the Spaniards arrived in Peru.

The fall of the Empire

The fall of the Inca Empire started with the war between Huáscar and Atahualpa (brothers). When their father, Huayna Cápac, died, Huáscar was in Cusco and Atahualpa was in Ecuador. So, Huáscar was appointed Inca of the empire, while Atahualpa became governor of Quito.

This broke the relationship between brothers and they started a civil war that Atahualpa won, becoming the last Inca of the Empire.

The people of the Tahuantinsuyo were not happy about this civil war and the empire was in a vulnerable situation. This is when the Spaniards landed in 1532 in Cajamarca, in the northern highlands of Peru. Unfortunately, Atahualpa was in this town when the conquistadors arrived and he was captured and kept prisoner. In order to free Atahualpa, the Spaniards were promised a room full of gold; however, the conquistadors broke the deal, killed Atahualpa and kept the gold.

Many Peruvian historians agreed that other cultures, such as the Cañaris or Chachapoyas helped the Spaniards end the Inca Empire.

After the fall of the Tahuantinsuyo, the Spaniards appointed three more other Incas that fought against Manco Inca in the Vilcabamba area. And Empire saw its last days in 1572 with the execution of Túpac Amaru.

Immersing in the Culture

Travelling and volunteering abroad is not only visiting places and helping people, it is also about learning the history and culture of the places you are in. Now you’ve learnt a bit about the Inca Empire, and when you walk around the city centre, you will think of the history behind the places you visit.

Proyecto Peru is a Volunteer and Language Centre focused on creating responsible volunteers by giving them the tools to have a great experience in Cusco. Check our website for volunteer and internship opportunities!