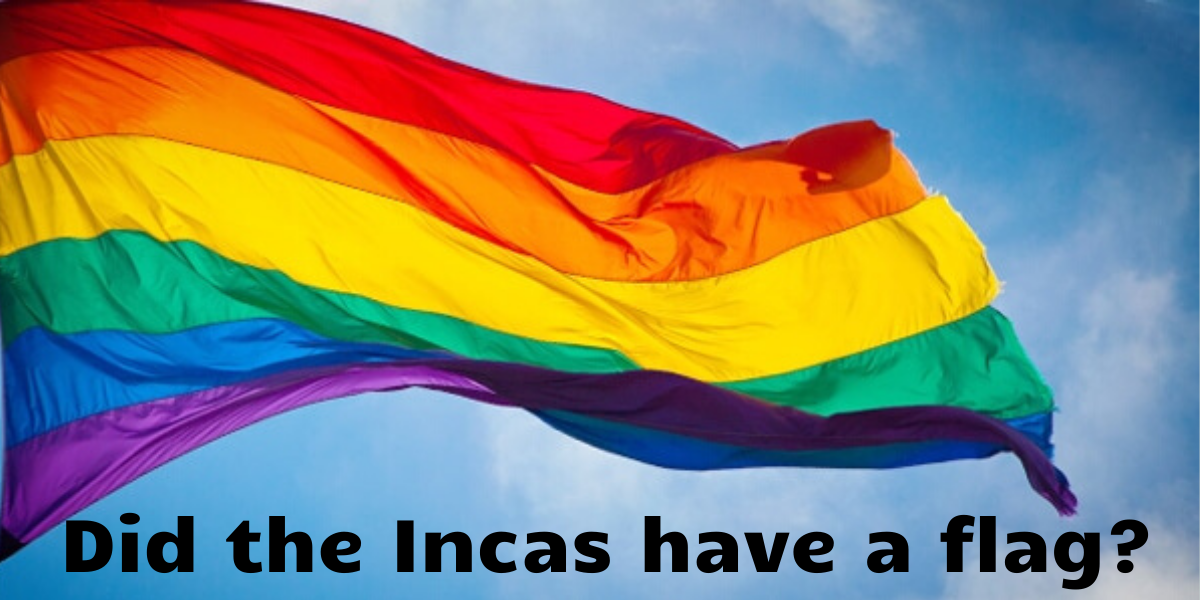 The first thing people visiting Cusco will see is the big rainbow flag at the main square and on all buildings of the city centre. Maybe the first thought you had when seeing this was Wow, Cusco is very LGTB friendly! I’m afraid the Cusco flag is not the same as the LGTB one. It has a different story. If you want to know more, then keep reading!

The current flag of Cusco is made out of multiple stripes of colours from red and violet: all the colours of the rainbow.  Cusco adopted this flag as the Tahuantinsuyo flag. However, many studies proved that the Inca Empire did not have one because the concept of a flag representing a country was brought by the Europeans.

The best source of information about the Incas comes from Spanish historians who collected stories from the local people (the Incas did not have an alphabetic system). In these stories, you can see that the Tahuantinsuyo did not have a flag per se, but what they did have were a bunch of colourful emblems that the Spaniards thought were the Incas’ symbols. Each Inca has a different emblem that represented him, but not the empire.

Before the arrival of the conquistadors, the civil war between Huáscar and Atahualpa ended with the victory of the latter. The Spaniards arrived shortly after this conflict and, during their first interaction with the locals, they were told an ancient myth in the Inca Empire. This myth was about the Wiracocha God, a white man with a long beard. He sailed towards the north and promised to come back when a powerful Inca takes over the empire. With him, the white man would rule the world.

The people from the Inca Empire saw Francisco Pizarro as the man from the myth, and Atahualpa thought he was the powerful Inca the white man was meant to rule the world with. This is why he decided to vanish all negative events of the empire, including objects (emblems of previous Incas).

After the conquest and the Spanish dominance, the indigenous people never stayed silent. In the XVIII century, Túpac Amaru II, an Inca descendant, organised a rebellion that shook the Spanish dominance in the southern Andes. After failing, Túpac Amaru was decapitated on the main square of Cusco. Then, the Spanish decided to ban all indigenous traditions linked to the Inca Empire; this way, people would forget their roots.  This rule lasted until the end of the viceroyship (1824).

After many decades, the people of Peru started to bring back their traditions. This is why it was important for them to recreate many cultural activities of the past. Here lies the beginning of the Inti Raymi, of Festival of the Sun.

So, the flag of Cusco itself was created in 1978 through a contest organised by a local radio station. This new symbol aimed to encompass the Tahuantinsuyo history. The author or designer of the flag took his inspiration from the wiphala, an Aymara word that means banner. This banner had a squared shape and had seven colours.

So, when you see this flag in Cusco, you can see a symbol that brings back memories of the past.

Proyecto Peru is a language and volunteer centre in Cusco, Peru. Check our projects and programmes here!