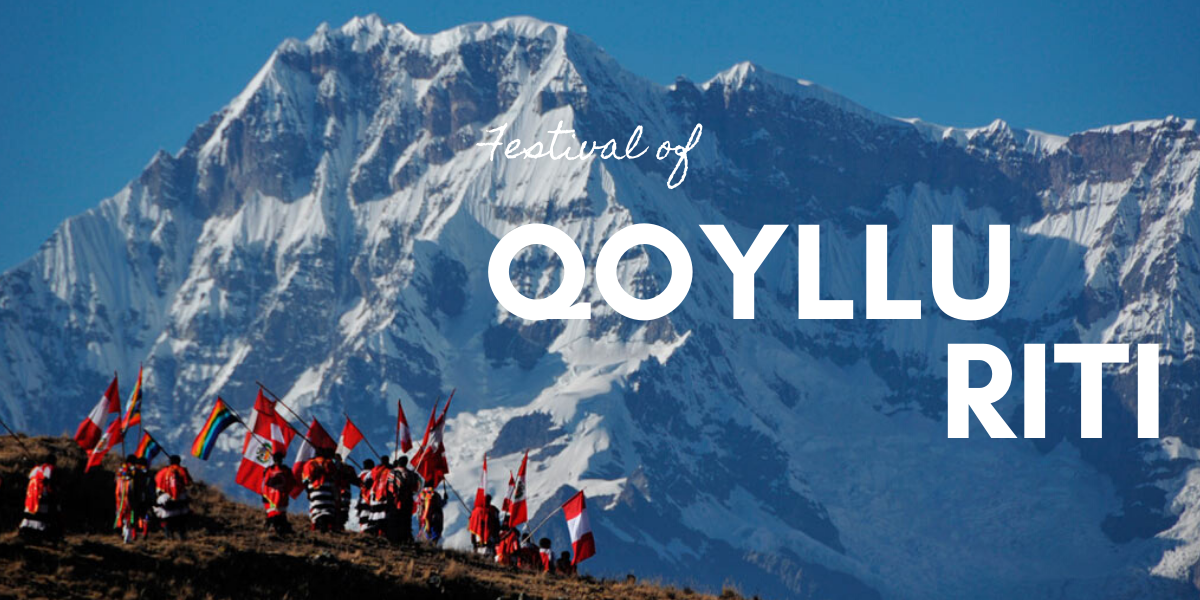 Peru is a very religious country, especially if you visit the highlands. In Cusco, the heart of the Inca Empire, the Qoyllur Riti has a special place in the locals’ hearts. A mix of Andean mysticism and Western religiosity. This festival gathers more than 10 000 people every year in May or June.

This is a festival you can witness if you travel to Cusco during these months. So discover all the wonders the Qoyllur Riti has to offer!

So, what’s the Qoyllur Riti?

This is a Quechua word for Snow Star. It is a religious festival that is celebrated 58 days after Easter and right before Corpus Christi. This is why the celebration changes from year to year.

This is a festival that mixes pre-hispanic Andean traditions with the religion brought by the Spanish conquistadors. In this festival, the devoted people use the image of Jesus, but deep inside, they are worshiping the integration between men and nature, fertility and earth, and the Apus (mountains).

Every year, people from different parts of Cusco and other regions of Peru go on a 5.3 mile pilgrimage. The journey starts in Mayahuani and ends five hours later in the Sanctuary of Qoyllur Riti. People have to go through the Sinakara Valley that leads them to the bottom of the Colquepunco glacier, at 4.800 metres above the sea level (15. 748 feet). Can you imagine the views you would be served while attending this pilgrimage!?

During this festival, each town sends a group of dancers dressed with colourful outfits. These dancers are in charge of transporting the crosses up to the top of the glacier and entertain the people attending with typical music and dances.

One of this festival’s protagonists are the Pabluchas, or Ukukus. They are anthropomorphic characters that participate in both the biggest festivities in Cusco: Qoylluy Rity and Paucartambo Virgin.

The Pabluchas or Ukukus get the attention from all attendees because their outfits not only cover their bodies, but also their faces. Moreover, they are in charge of helping the people in the pilgrimage and keep the order in the area.

These characters also do different acts of penance, such as walk on their knees and bury their hands in the snow, or go on the top of the glacier and carry down big blocks of ice for the town people because it is thought that the glacier ice has healing powers.

The pilgrimage, penance, music, and dances are accompanied by catholic services adapted to the local languages: Quechua, and Aymara.

All these traditions and many others held during the Qoyllur Rity festival are very interesting. The Qoyllur Riti was declared an Intangible Cultural Heritage by Unesco in 2011.

How did this ceremony start?

According to local stories, a kid named Mariano bumped into this young man named Manuel on the mountains. They became close friends and, thanks to Manuel’s help, Mariano’s flock grew fast. When Mariano’s father saw how his son’s flock grew, he and the town’s priest wanted to meet Manuel. However, when the priest arrived in the meeting point and tried to greet the young man, Manuel became a rock.

From a catholic perspective, this story and the role of Manuel represented baby Jesus. From the Andean cosmovision, this represented the union between men and nature.

The Andes of Peru have many stories to tell and this is only one of them. Interesting, right?

Proyecto Peru is a Language and Volunteer Centre. Check our projects and programmes here!